"The 'feel' of the Oarsome Grips was excellent and the hollow profile provided a unique shock absorbing property which was noticeable throughout the test and something that I have not experienced before. Cool!" Rich, Genius, Wales

Find out how Rich got on his trial Oarsome motocross bike.

Rich from South Wales got in touch with us as he wanted to trial the Oarsome Grips on his motocross bike. As an extremely experienced and very sensible rider, we eventually agreed. Don't try this at home!

"Ok, I've used the grips for an hour this afternoon; here are my findings: the grips are too bulky in the hand; too much grip causing thumb fatigue that wasn't previously experienced. Also, as a result of the bulkiness, it was possible to accidentally operate the throttle in bumpy conditions. This happened several times and I pooed my pants. Nice

The "feel" of the Oarsome Grips was excellent and the hollow profile provided a unique shock absorbing property which was noticeable throughout the test and something that I have not experienced before. Cool!

The compound, I would say is just right for me and, in all probability, most riders. I would say it is a "soft" compound which, I understand, is the most popular grip compound for off road riding.

The fitting of the Oarsome Grip to the throttle tube was just right; the fitting of the left hand grip to the bar required some taping up of the bar to tighten the fit. Both Oarsome Grips were safety wired, which is the conventional way of preventing grips from twisting or working loose. It was possible to conceal the wire twist in the void of the grip, which was nice and neat and did not necessitate pushing the wire twist into the Oarsome Grip which can sometimes lift during use and pierce gloves and skin. 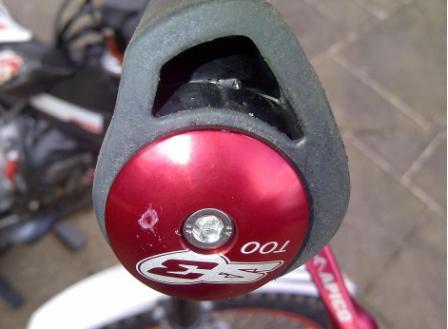 I experienced rubbing on my throttle side thumb and am sure it would have blistererd with extended use. If the Oarsome Grips were less bulky I think I would go to the effort of cannabalising a pair of standard grips and supergluing the thumb stops onto yours. I fitted aluminium bar ends with your Oarsome Grips. Most grips have integral stop ends incorporated into the moulding requiring trimming off with a sharp blade if aluminium ends are to be fitted. Personal preference."

Great effort Rich! Sounds like some tweaking is needed for future use on Motocross bikes....we'll get on the case!