Some insider knowledge, layman's terms for the dramatic outcome and why the rowing community is great to be part of.

The 160th Oxford vs. Cambridge Boat Race concluded today, with a victorious Oxford University boat club. The race was decided just 5 minutes and 10 seconds in to the historical event, which usually lasts around 18 minutes.

For those of us watching from the banks of the river Thames, or from our screens at home who may not have a huge knowledge of rowing; the mishap that cost Cambridge their fighting chance was down to an error that is known in the rowing community as ‘catching a crab’.

Every rower has caught one at some point in his or her rowing careers, and as the Oxbridge athletes graciously explained, catching a crab is just ‘one of those things’ (there are no crabs involved!).

Unlucky Luke Jucket, of Cambridge had the spoon of his oar (the coloured part that goes underwater) clattered by the oars of the Oxford rowers and he momentarily lost control of the oar.

If you consider the range of moving forces: the rowers (moving forward on their slide and seat), the water and river current underneath and around the boats, and the boat traveling – all happening at around 13mph a misbehaving oar is not something you want travelling towards you.

An oar that has caught a crab is impossible to stop! Viewers at home could see the oar spin out of the oarsmans’s hands and run parallel to the boat. 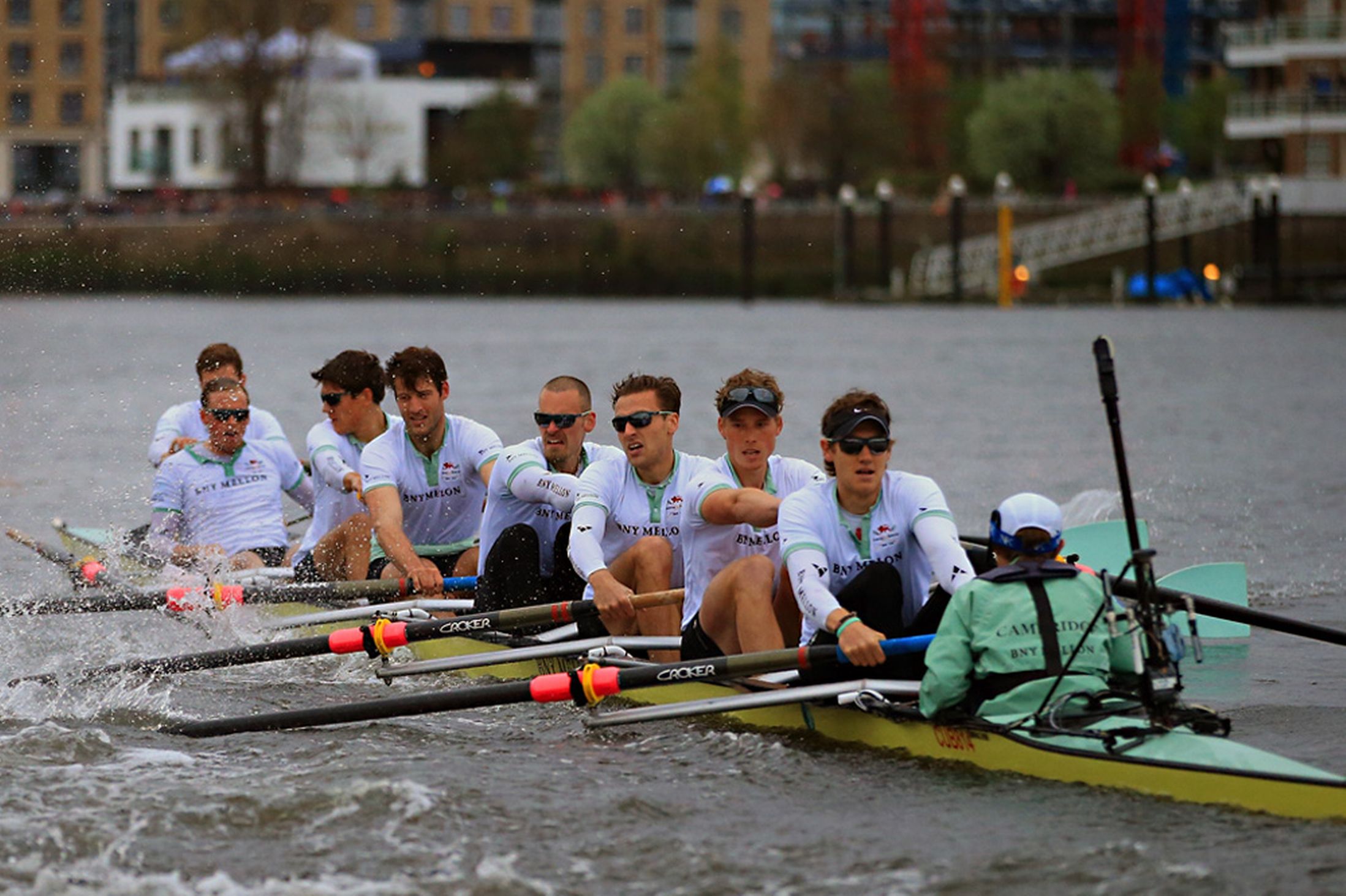 As the handle travels, it often hits the oarsman in the chest or stomach often winding them, leaving the rower behind them to catch the handle and get the oar back in to position, while still rowing themselves, trying to keep disruption to the other rowers at a minimum and pass the handle forward in to the rightful hands! In some severe causes the rower could be ejected from their seats.

It is a both a painful and frightening experience, and ultimately lost the light blues their race today.

Another reason why the gap expanded between two the crews was because the unruly oar had broken its rigger. The rigger attaches the oar to the boat, (the two metal bars standing out from the boat) and makes it possible to row and really put your weight behind it. With a broken rigger, you simply cannot take the powerful strokes you need to. With rowing maybe being the ultimate team sport, it is likely that bow, (the athlete behind the Jucket who caught the crab) would have had to have eased off his powerful strokes and matched the oarsman in front of him, to ensure the boat stayed on a straight course.

This is just how things go with rowing sometimes, but what gracious winners and losers both crews were. It just shows what a good sportsmanship culture the rowing community has, and it is great to be part of.

If you fancy trying rowing following the Oxford Cambridge Boat race, check out British Rowing. You can enter your postcode and it will tell you your closest club. There are so many opportunities for people with disabilities to get involved with rowing too. Our Oarsome Grips work with all different kinds of rowing, and all different kinds of hands. So, if you fancy a little something extra to help you with your technique, and of course keep those painful blisters at bay, then pick up a pair! We LOVE talking rowing, especially with new rowers, so drop us a line!

Leave your own comments